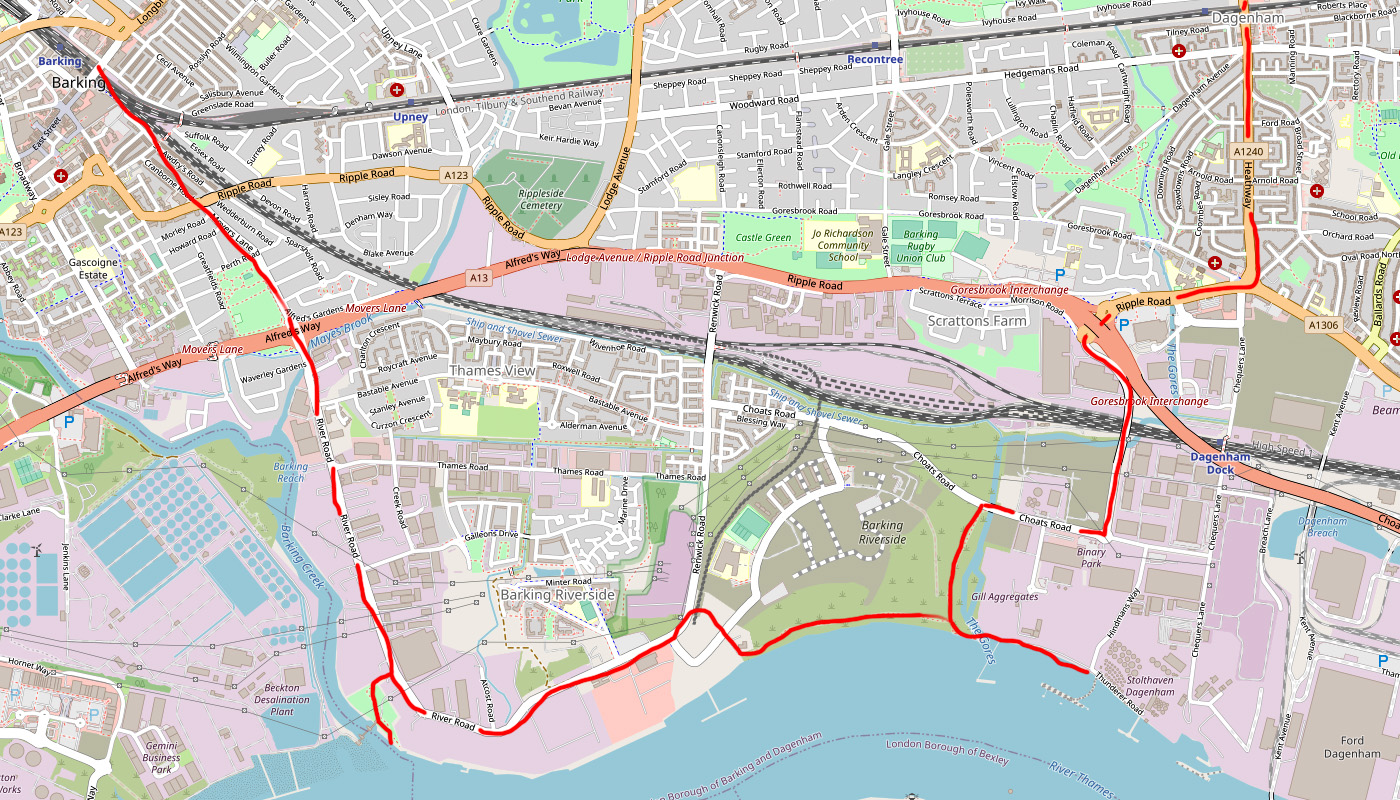 The walk began at Barking train station, a short journey from my home in Stratford.

As I exited the station, I could feel the buzz as I walked on to the high street into the hustle and bustle of the Saturday market: stacks of fake designer trainers (Nike and Yeezy), exotic fruit and veg and fresh fish.

It was a sunny Saturday in December 2019, the flow of the crowds were pulling me into the market, but I was not here to shop. My itinerary was to explore the River Road industrial estate and find a route along Barking Riverside, the area being developed into London’s newest housing estate.

As I walked through the high street I couldn’t help exploring some of the side streets to look at some of the older and more modern tower blocks.

Eventually I reached A13 dual carriageway (Alfreds Way) which carved the boundary line between Barking town centre and the River Road industrial estate, situated in the Creekmouth area of London. It is separated from Beckton by the River Roding to the West and the River Thames at its southern edge.

As I crossed over the A13 and on to River Road, the dynamics changed from the busy and crowded town to the calm and vastness of the long open road and large industrial buildings.

The long path down River Road became dustier and filthier the further I progressed. The occasional lorry would thunder past adding another layer of dust. The buildings stood dark and foreboding to both sides, warehouses, cash and carrys, scrap yards and builders merchants.

A decommissioned steam train on the other side of the road caught my eye. It was on display outside a timber yard. 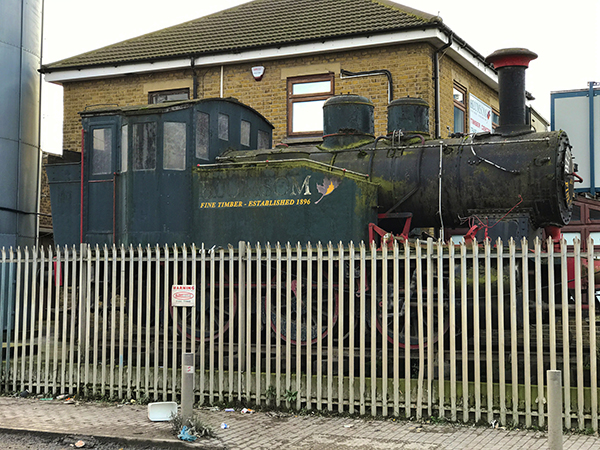 An original Wharf building (Algor Wharf) stood thin and tall with its brown brickwork and tall panelled windows on full display. An impressive building in its own right. 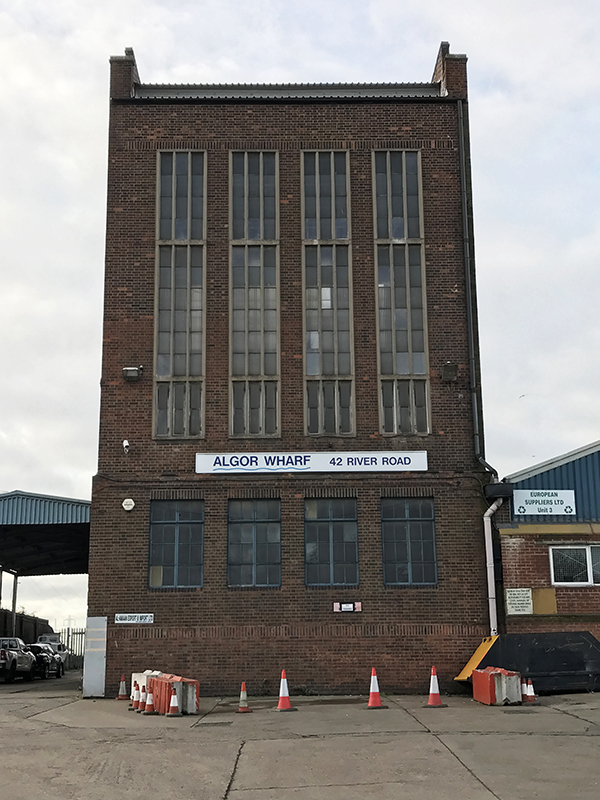 Further along some wide open gates, with blue wavy railings (depicting the water), invited me into the Creekmouth Open Space. As I climbed the small hill I could see the Barking Creek Barrier: a towering concrete structure holding a blue gate. At 60 metres tall and weighing 200 tonnes, the barrier sits over the confluence of the rivers Roding and Thames and is part of the Thames flood defence system.

I climbed over the river wall to gain a better view of the surroundings. Downstream I could see several pipes leading out from Beckton sewage treatment works into the Thames. London city dominated the skyline ahead and the Barking Creek Barrier to the right. Behind me I could see two diggers offloading scrap metal from a ship. The relentless mechanical sound was menacing against the natural sound of the river and birds.

As I exited Barking Creek Park I read an information sign which said that I was standing in front of what was Creekmouth village (1856 – 1958). I found it hard to believe that a village once stood here. The villagers had to be re-housed after the village was flooded in the North Sea flood of 1953.

Back on River Road a large colourful mural adorned the wall. The artwork is a tribute to the victims of the SS Princess Alice sinking in 1878, which happened nearby. More than 650 people were killed when the passenger paddle steamer collided with the collier Bywell Castle. 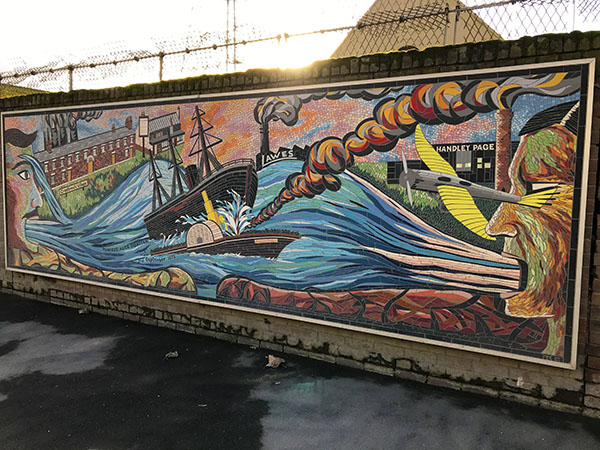 After this point the road turned eastward and ran parallel with the River Thames. I originally wanted to walk river side all the way along this stretch but this was not possible due to industrial works claiming the land.

As I walked along river road, the path became even more muddy and much of the industry to either side was obscured by large metal fencing. I peered through a boarded up fence to see an impressive building which formed part of the old Barking Power Station (most of the power station buildings are now demolished).

Further along was the sign for the famous Dagenham Sunday Market. On the other side of the road were some electricity pylons humming loudly in the sun.

I had been on this road for quite a while now so was eager to get back alongside the river. Fortunately there was a sign which pointed me in the right direction. Before I headed there I took a couple of minutes to observe the open road ahead (Fielders Crescent).

Very soon this would all be built up, part of Barking Riverside development. Currently the foundations were being laid all around. In the distance I could see some of the newly built flats and a new school (Riverside Campus) but the place was a ghost town. An empty bus passed by.

As I walked down the stony path past Container City (shipping container architecture), at last I could see the overgrown grassland of Barking riverside and beyond that, the River Thames. In the distance towards Dagenham Dock were industrial buildings, oil storage tankers, ships and wind turbines.

A long disused jetty stood dormant in the river to my right, with its zigzagging wooden legs forming patterns against the sunlight beaming through. On the south side, two recycling plants with their chimneys belching out smoke, dominated the Erith skyline. A fascinatingly romantic juxtaposition of nature and industry.

I walked along the grassy trail taking in all the views not knowing exactly where I would end up.

As I neared the industrial shoreline of Dagenham, a flood defence wall began which was covered on both sides by graffiti. I walked along the outside of the wall with a steep embankment and mudflats to my right. The bright colours of the graffiti glistened in the sunlight in stark contrast to the brown riverbed and grey pipes across the mudflats that lay ahead.

I clambered down onto a ledge and past three discharge pipes, taking heed of the warning sign. I was now on the stony beach. The tangle of wood and plastic debris amongst the rocks made the terrain difficult to traverse.

Could I go further and where would I end up? The route ahead looked hostile: cranes, jetties, storage tanks and a ship in dock. I had an overwhelming sense that I was not meant to be here, heightened by the increasing volume of industrial drones as I delved deeper into the zone. So far I had not passed any ‘no entry’ signs.

I spotted a metal ladder leading up the river wall so climbed up and peered over, not knowing if any one was on the other side. I could see an aggregate plant with lots of machinery but no obvious through road. I decided to retreat back to the graffiti wall and make my way back inland.

I followed the path inland which ran parallel with the River Gores, eventually spitting me out at Choats Road. (Random fact: there is only one street named Choats Road making it unique in Great Britain).

Having explored River Road and Barking Riverside, I was now on the last leg of my trip, a two mile walk through industrial estates and suburbia to reach Dagenham Heathway London underground station (served by the District Line).

This is such a fascinating area, I will certainly be coming back here to explore further and hopefully before it is all covered in new build housing.

Once upon a time in #beckton … #england #flag