It was a clear, fresh day in December 2019 and I was about to take a fascinating walk along the lesser trodden paths of the Thames riverside: a five mile trek taking in industrial sights, sounds and smells from the past and present.

My starting point was Rainham Marshes Nature Reserve, just off the A13 trunk road. Upon climbing the steps towards the visitor centre, instead of turning right into the marshland (a popular spot for bird watchers) I turned left, immediately crossing the River Mardyke which was in full flow after two days of heavy rainfall.

Heading eastward the path led into the small town of Purfleet, passing the Purfleet Heritage & Military Centre, a local military museum and former gunpower storage house. Here, the river was separated from the path by some quaint metal railings.

A great view was on offer from this vantage point both up and down river so I took a moment to enjoy the vistas.

Directly across the Thames I could make out the shape of Dartford Creek Barrier (Barking Creek Barrier’s little brother) which sits over the mouth of the River Darrent and protects the mainland from tidal flooding.

Directly West of the Mardyke River lay the remains of a submerged forest, up to 6,000 years old (visible at low tide).

Back towards London, through the haze I could still make out the famous London city skyline with Canary Wharf in the centre. Despite having travelled far out from London, we were still unequivocally connected.

I made the mistake of walking to the end of this section of path only to be met with a ‘No Entry’ sign. The walkway was blocked off with a security fence and barbed wire. The next section of riverside path was inaccessible, so I headed back the way I came to see if I could loop around and join the path further along.

I walked the only route available, inland towards Purfleet train station where I saw a small sign marked footpath, pointing to some abandoned houses (subsequently knocked down).

I followed the track around the back of the condemned houses and eventually reached the Thames flood defence wall. An impressive gallery of graffiti extending for about 30 metres, adorned the inside of the wall. I walked along analysing the colours and lines of the artworks until eventually the route became more secluded as a second wall began to my left.

Now and again, peering over the top of the wall I could see old dilapidated wooden jetties, oil tankers, ferries and oil storage cylinders. The sound was an overpowering mixture of industrial drones and seagulls squawking.

The Elisabeth Schulte oil tanker was in dock, looking like it had seen better days. Further along, the impressive Yasmine cargo ship was being decanted speedily by thundering lorries clearly under time pressure as they sped across the precarious concrete bridge connecting the ship and mainland.

Still in place were two abandoned wooden jetties leading out to Yasmine. Seeing these old structures along the river conjured up images of all the old shipping vessels and industries that would have taken place here over the last 100 years.

After being enclosed by high walls on both sides for quite a while, the path reached an opening and that’s when I caught my first glimpse of the Queen Elizabeth II Bridge (one half of the Dartford Crossing):  an impressive sight to behold, spanning 450 metres wide and 137 metres tall.

The next stretch of the walk was dominated by the towering bridge structure although the sights were fascinating in every direction: oil storage depots, pipes, air vents (for the Dartford Tunnel beneath), conveyer belts leading into the river (more than I could count), the QE2 bridge, a small beach with an endless array of washed up debris, mudflats gleaming in the sun, the River Thames, old wooden jetties and two large cargo ships in dock.

The Dartford Crossing marked the mid-way point of the walk and I thought this would be the highlight of my journey, but there were more impressive sights to come.

Passing under the towering structure through to the other side I felt like I was entering another realm.

In front of me were another set of pipes painted a strange shade of turquoise, a tarmac factory and an abandoned, trashed red car, perhaps a warning. So far I had not encountered another person on this walk which added to the eeriness although I had seen some fresh paw prints on the beach so I knew I was not completely alone.

After the tarmac plant there were no more buildings for quite a while. The scenery became wild and dramatic with fields to the left and on the south side of the river, Greenhithe town followed by Swanscombe marshes.

The concrete flood defence wall twisted and turned in tandem with the river for about 3km. Not one part of the wall was left unpainted with graffiti.

I walked alongside outside of the wall, taking in each artwork as if I was in a gallery. This did distract me slightly from the natural landscape unfolding so I had to keep reminding myself to look back towards the river.

As I neared the end of the walk, on the left out of nowhere appeared a dystopian looking building made up of pipes, cylinders and chimneys. This was a ‘Proctor and Gamble’ chemical plant.

I saw a group of men spray painting the wall between the factory and river, they stood back to analyse their work. This was my first human encounter on the whole walk, I wasn’t sure if they would be hostile but they smiled as I walked past. Looking ahead, the framing of the graffiti wall and chemical plant together looked like the backdrop from a ‘Mad Max’ film.

After passing a few more jetties and a dark, muddy underpass, I finally reached the edge of Grays town which sits beside a bend in the river. By this point the tide was fully in and the mud coloured river water was brimming at the top of the sea wall.

From here, I walked to Grays train station and caught the 7 minute C2C train ride back to Purfleet near where I began my walk. It had taken me several hours to complete the walk, so to view everything in reverse out of the train window in just 7 minutes was quite surreal.

Upon reaching Purfleet train station, it was just a short walk back to Rainham Nature Reserve car park, just in time to catch the sunset over the Thames looking back towards London city, where I was about to return. 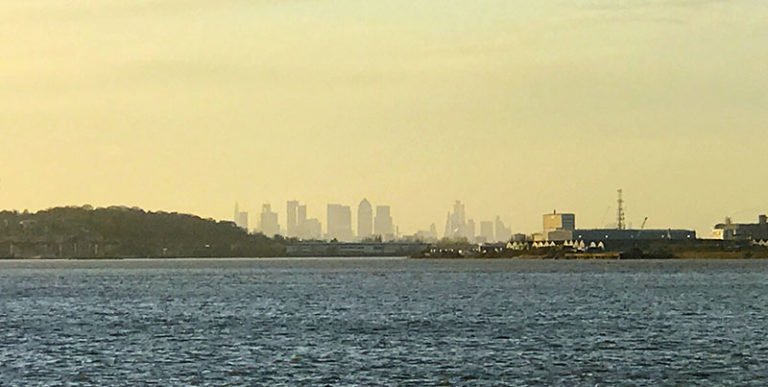 Barking to Dagenham via River Road

One of the #ww2 #antiaircraft #defence #forts at #

These have been on my list for a long time, finall

Something in the distance… #maunsellforts #la

No burger for me… #southendonsea #pigeon #wimp