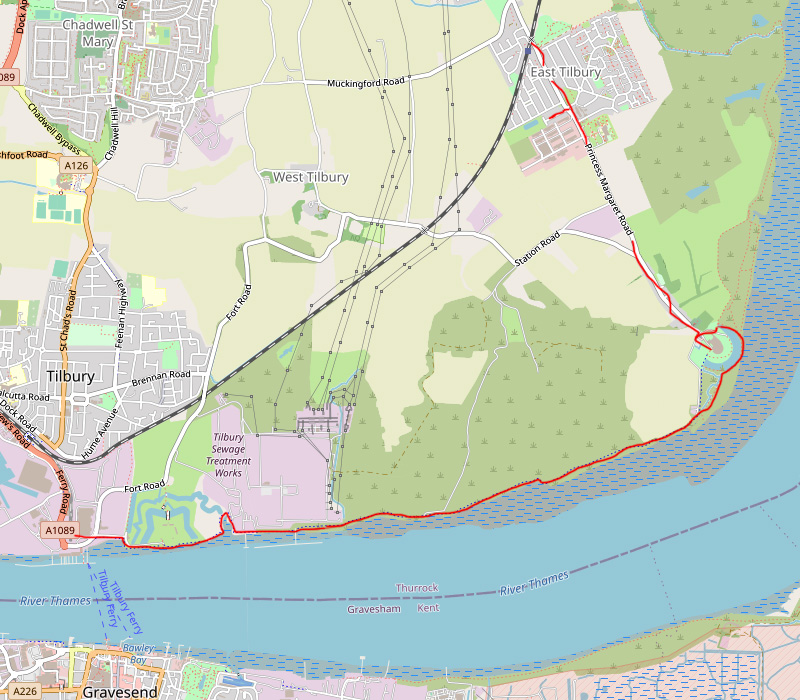 On an overcast day in January 2020, I decided to walk from Tilbury Fort (near Tilbury Town) to Coalhouse Fort in East Tilbury. I had visited both locations before but had never walked the route joining them, so this was another ‘Thames Estuary walk’ to tick off the list.

My walk began at the ‘Worlds End’ pub, a well known landmark built at the turn of the 17th/18th century. The pub, quite secluded from the town, is located past Tilbury Docks and Cruise Terminal, hidden at the end of a small road often filled with parked up lorries. Access by car is about 10 minutes from the A13 or by foot, a 15 minute walk from Tilbury Town train station.

A few steps up on to the concrete sea wall revealed the River Thames at low tide. The mud flats carved up into hundreds of tiny streams where seagulls were foraging for worms.

Across to the right, London Cruise Terminal sat empty and four large wind turbines spun silently in the sea breeze.

Directly across the river stood the ancient town of Gravesend, unmistakable from the bright red lighthouse ship which is docked beside Gravesend pier. Known as LV21, it was the last lightship built in the UK and now acts as a floating arts and performance space.

Looking east, the direction I was heading, you could make out the gun turrets of Tilbury fort. It was time to get going.

A few yards along from the Worlds End pub, I passed by Tilbury Fort and Tilbury Fort Marshes. Built by Henry the VIII but used up until the second world war, large guns silhouetted against the horizon must have served as a warning to enemy ships sailing up stream. A series of angled moats protected the fort by land.

Beyond the fort, the path turned from concrete to track. Some steps led over a boundary wall, beyond that the landscape became barren and the track a lot muddier.

I walked along the outside of the flood defence wall, now much higher than before at about 2 metres. This was the old site of Tilbury coal power station. No trace left of the massive chimneys and derelict turbine hall that once stood here not so long ago. The only evidence lay in the river, where stood an old jetty with cranes, conveyer belts and service buildings on top.

I walked beneath the jetty, through a graffiti covered underpass and now I could see the wall stretch out far in front with wild grassland and washed up debris separating me from the river.

The graffiti was sparse along this part of the flood defences, allowing the colour and texture of the aged wall to dominate, complimenting the muted tones of the grass and shrubs. In the wilds, away from industry and noise, at last nature was the dominant feature.

I was drawn away from the main path, to a dilapidated jetty which caught my eye: a wooden structure on its last legs holding up a rusted metal platform. Beyond this point, I could see an old WW2 pillbox which had nearly collapsed onto the beach.

The next major landmark would be the WW2 East Tilbury radar tower. An abandoned brick and metal structure still standing on the edge of the river. I stopped to look at the structure while a small cargo ship zipped past carrying containers from Tilbury port.

Beyond the radar tower, a small walk to the final destination, Coalhouse Fort. Built between 1861 and 1874 to help defend the Thames estuary. The fort is surrounded by a series of moats and bunkers which are great to explore. From here you can make out the outline of DP World London Gateway port, a deep sea container port tucked away about 3 miles up stream.

Although Coalhouse Fort was my end point, I couldn’t travel all the way to East Tilbury and not visit the Bata shoe factory. It was founded by Tomas Bata in 1932 after a plea from Tilbury clergyman to alleviate unemployment during the Great Depression. The factory, surrounding workers’ houses and Tomas Bata statue together have a real communist feel, like being transported to an Eastern Bloc country.

After the Bata factory I headed to East Tilbury train station which would take me one stop back to Tilbury Town, where I started. A nice round trip.

One of the #ww2 #antiaircraft #defence #forts at #

These have been on my list for a long time, finall

Something in the distance… #maunsellforts #la

No burger for me… #southendonsea #pigeon #wimp